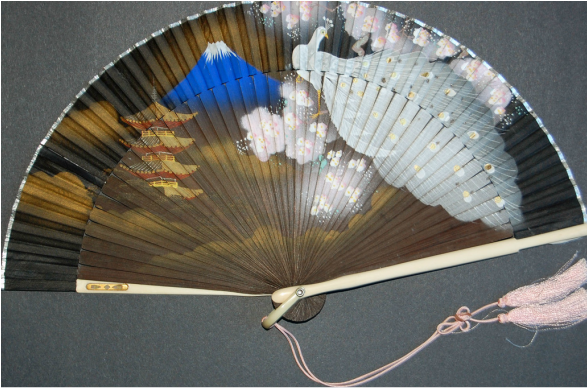 Unfolding the Fan traces two stories in two different generations in which people love across cultural divides and against cultural and legal prohibitions. In 1941 Lily Holderman meets Howard Fujimori in the Imperial Valley of southern California. Lily is married, but even if she could divorce her husband, California law would not allow her to marry Howard. After December 7th, the burgeoning anti-Japanese furor in California leads toward internment of the Japanese Americans, and white fears of Japanese American espionage lead down violent paths. In 1999 Lily’s daughter Terry Straczynski, a documentary filmmaker, discovers after Lily’s funeral that Lily had a secret in her past. Terry, on the pretense of making a documentary film about her mother’s life, sets out to discover that secret while wrestling with her own love life. A lesbian who is not out to her family, Lily loves Celine, but, as a second-generation victim of the emotional damage of WWII and carrying her own internalized heterosexism, Terry can’t commit to the kind of relationship Celine seeks. As Terry interviews people who knew her mother, a fragmented version of the past emerges, incomplete, partial, but revelatory. In chapters that alternate time periods, 1941 and 1999, the mother and daughter’s stories unfold.

This manuscript is complete, and currently seeking a publisher